For his entire life, former Chief Justice Joseph Annan has his eyes on his country’s top 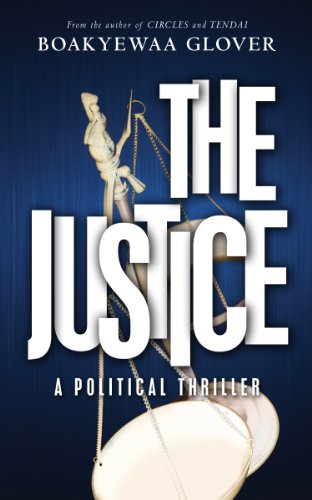 prize: the presidency of Ghana. And this time, he will stop at nothing to ensure the title is his alone. But can he stop his world from falling apart in the process? The Justice: God. Country. Family. is Boakyewaa Glover’s searing political thriller that follows a career politician in his last gasp for the highest honor, as friends, foes, and family are embroiled is his relentless, no-holds-barred play for power. It’s a gripping contemporary look at Ghana culture that is sure to enthrall political enthusiasts, as well as fans of romantic fiction and mystery thrillers.

After four years in semi-retirement, the esteemed justice has put in his bid to be the next president of Ghana. Beloved throughout the country, Annan is widely celebrated as a principled, strong leader, who is intensely dedicated to his country. However, the long-adored icon harbors secrets that begin to surface soon after his bid, and that he must utterly suppress if he is to land the top position. At his side is his razor-sharp Chief of Staff Caleb Osei, whose commitment to the cause is unflappable, and the most powerful advocate of all, his best friend and former President Samuel Yara.

However, friends and allies withstanding, the justice faces challenges are equally formidable. His wife Adubea is emotionally unhinged after finding her twin sister murdered, and must be managed with constant medication and a close watch. His daughter Abby presents her own thick brew of problems. She has become entangled in a scandalous affair with the married Reyn Proctor, the scion of a wealthy corporation. Abby’s ties with him would no doubt point the finger at government corruption, and erupt in a media flap that would upend the campaign. And, there are past deeds involving the justice himself that have never been fully explained.

As the stakes rise ever higher, the justice finds his carefully woven public persona unraveling before his own eyes. With a high-octane pace and page-turning intrigue, The Justice: God. Country. Family. provides a rare view of the forces at play in contemporary Ghana that will leave readers hungry to piece together the fragments of deception. It’s riveting reading packed with spellbinding action, steamy romance, and a sizable dose of drama, Ghana-style.

The blurb above highlights quite a lot to be expected in the book, in my opinion. But it does not mention how volatile the plot is. Boakyewaa Glover’s novel, The Justice, set in Ghana and the US, has all the ingredients present in a fast paced, gripping, tense and explosive thriller, and a political one at that; power, money, sex, corruption, murder, love, hatred, jealousy and revenge. And these ingredients are well mixed, a veritable salad. Sensational.

If I had read The Justice about ten years back or more, I would very much have doubted  the plausibility of the plot. Not today, in this present-day Ghana. Politics has become exciting, dangerous, full of adrenaline and scandals involving sexual escapades of politicians, blackmail and counter blackmail and very much lately, the adventurism of some Chinese nationals in our oil and mining ventures, as well as in the bedrooms of the power brokers. Boakyewaa Glover has written a blockbuster!

Ms Glover’s characters are powerful and passionate, believing in the causes that drive them. Whether those causes are justified is left for the reader to find out. They are also flawed, with dark sides to their nature that will make your jaw drop. And they are human too. Love these characters or hate them; the reader can’t help but feel empathy. The twist at the end of the novel is so mind-blowing it has me reeling for days.

My only beef with the The Justice is I don’t particularly like Abby, daughter of former Chief Justice Joseph Annan. Abby is one of the main characters in the novel and I find myself gasping at some of her decisions and behaviour wishing she would just grow up. Did she?

Ms Glover’s novel The Justice is a must read for all. A very well-researched novel, with settings clearly described and real. An honest and punchy novel dealing with the powerful forces of politics and the passions and greed that drive the human being, even at the highest levels of government. How far can a human being go to achieve his aim of serving God, Country and Family? Please, read The Justice available at Amazon

Boakyewaa Glover is the author of three novels: Circles (2009), The Justice (2013), and Tendai (2013). She also maintains a blog that features her short stories, poems, articles, and movie reviews. The author’s love of writing began as early as the age of six, when she collected scraps of paper on which to write down her stories. Professionally, she is currently the regional change management manager for Newmont Ghana Gold Limited. She also serves as the group director for Minds on Fire Group, a publishing, entertainment, and creative lounge company. Glover has previously worked as a news anchor and presenter for TV3 and Metro TV, and as an organizational psychologist and consultant for various consulting firms in New York; Washington, D.C.; and Atlanta. She is a graduate of the University of Ghana and earned a master’s degree in psychology from New York University.

The Cherita was created by al li. I’ve fallen in love with this lovely poetry form. And for each working day I shall endeavour to post a cherita a day on my blog. 🙂

one day I shall grow wings

my thoughts are like rainbow
a spectrum of ideas, floating

oh, let my wings sprout
my thoughts set free
from this narrow window of your views